Yuanshuo Bridge opens to traffic ahead of National Games

The Yuanshuo Bridge across the Bahe River in Xi'an, the capital of Northwest China's Shaanxi province, opened to the traffic on June 29. It is the world's widest spatial double-cable plane self-anchored suspension bridge. 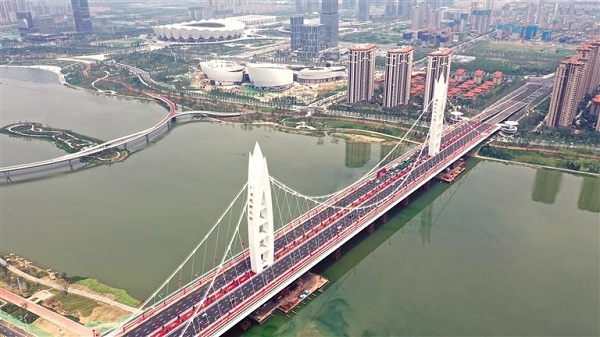 An aerial view of the Yuanshuo Bridge across the Bahe River. [Photo/Xi'an news network]

It is also an important arterial road connecting east-west traffic in the northern area of Xi'an.

Construction of the bridge started in October 2019. The bridge starts from Beichen Avenue in the west and ends at the intersection of Gangwu South Road and Yingbin Avenue in ITL Park, with a total length of about 2.3 kilometers.