National Games get some Spanish splendor

In all, over 12,000 athletes representing China's provinces, municipalities, autonomous regions and special administrative regions, have gathered in Xi'an, capital of northwest China's Shaanxi province, this month for the 14th National Games.

Known as China's mini-Olympics, the Games are the biggest national multisports competition. This year's Games feature 595 events, covering 54 sports, with the nation's top athletes in 35 sports competing in 410 events. The remainder are mass participation events.

Spanish luxury hotel Gran Melia Xian is serving as an official reception hotel for the Games, which Jerome Molina, the hotel's general manager, said represents a new milestone for the hotel.

Molina said he and his staff were very proud and happy to learn that the hotel had been appointed as an official reception hotel for the ongoing national sports showcase, which ends on Monday, as well as the 11th National Paralympic Games and the eighth National Special Olympics scheduled for Oct 22-29 in Xi'an.

"These sporting events are important for Xi'an and for Shaanxi province," said Molina. "Being part of them was recognition of our hotel's performance, but it is also a big responsibility."

That would have been true at any time, but the responsibility has been even greater because of the COVID-19 pandemic.

Strict precautions have been put in place. All the hotel staff have been vaccinated and nucleic acid tests are being carried out every 48 hours. A dedicated team disinfects all the public areas twice a day, and key areas, such as washrooms and elevators, are disinfected every hour to ensure the health and safety of all guests and staff members.

Organizers have been working with the hotel to ensure that everything goes without a hitch, as the goal of the Games is zero infections.

"Besides our fully trained hotel team, the National Games committee has sent a special service support team to our hotel. Their work includes epidemic prevention, medical treatment, security and equipment operation, among other things. They are working very closely with us," Molina said. 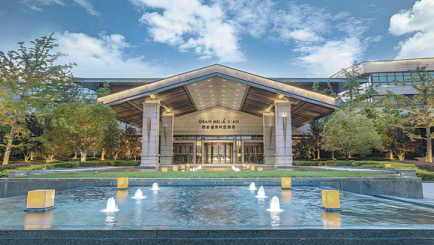