National Games for disabled kicks off in Xi'an 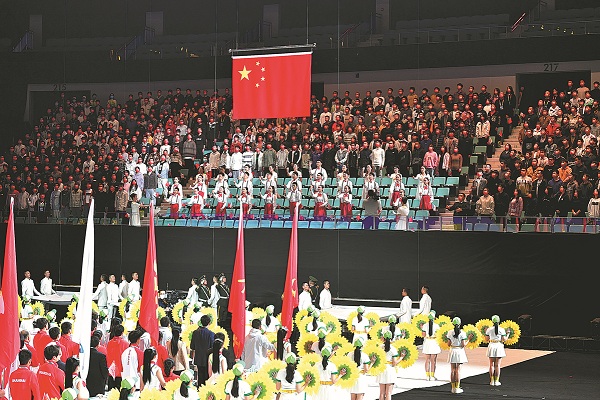 The opening ceremony of the 11th National Games for Persons with Disabilities and the 8th National Special Olympic Games is held in Xi'an, Shaanxi province, on Friday. [DU WEI/FOR CHINA DAILY]

The national games for people with physical and mental disabilities opened on Friday night in Northwest China's Shaanxi province.

Through to Friday, over 4,000 athletes will compete in 43 sports at the 11th National Games for Persons with Disabilities and the 8th National Special Olympic Games held specially for people with mental health challenges.

Wang Meimei, deputy executive council director of the China Disabled Persons' Federation, said on Thursday that the games are also seen as a training test for the 2022 Beijing Paralympic Winter Games, which will take place in March.

It will contribute to the preparations for the Paralympic Winter Games and promote the development of winter sports for the disabled, said Wang, who is also one of the deputy directors of the organizing committee.

The majority of the events will be held in the cities of Xi'an, Baoji, Tongchuan and Weinan, as well as the Yangling Agricultural High-tech Industrial Demonstration Zone around 80 kilometers west of Xi'an, the provincial capital.

Some competitions, such as the football games for the Special Olympic Games, wheelchair fencing and taekwondo, have taken place previously in Beijing and provinces including Liaoning, Guangdong, Zhejiang, Hubei and Qinghai.

The recent Tokyo Paralympic Games, which closed in early September, saw Chinese national team members win over 200 medals and set 29 world records. Since they came back home, the athletes have kept training despite the limited facilities in quarantine and received online guidance from their coaches, and spared no effort to recover and prepare for the national games, according to Wang.

It's the first time the national games for disabled individuals has been held at the same venues and in the same year as the National Games, in line with international practices, said Fang Guanghua, vice-governor of Shaanxi and secretary-general of the organizing committee.

After the 14th National Games concluded on Sept 27, its venues were equipped with assistance devices and sign language translation services.

And over the past three years, the province has been making efforts to improve barrier-free facilities in hospitals, tourist spots, hotels and restaurants around the stadiums, fix blind tracks and ramps, and equip buses with such infrastructure on more than 50 lines, according to Fang.

As 11 COVID-19 cases were reported in Xi'an between Sunday and Thursday, the event has been taking strengthened measures to ensure that athletes, staff and others involved are in a closed loop, Wang said. 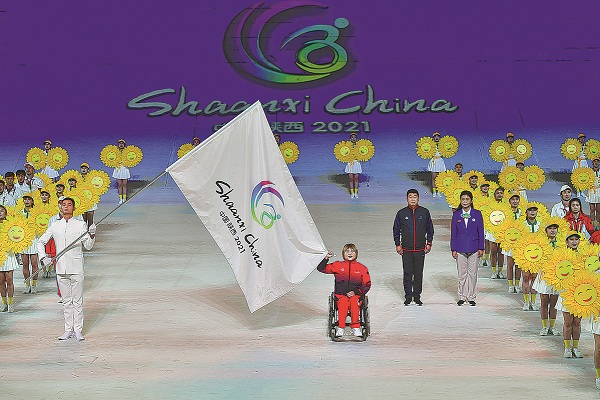 Athlete Dong Feixia leads peers in taking an oath at the opening ceremony of the 11th National Games for Persons with Disabilities and the 8th National Special Olympic Games in Xi'an, Shaanxi province, on Friday. [DU WEI/FOR CHINA DAILY]