The Xi'an Gaoke Aoti Plaza Hotel, which is located in the Xi'an International Trade and Logistics (ITL) Park, Xi'an, capital of Northwest China's Shaanxi province, and is a supporting project of China's 14th National Games, was recently commended. 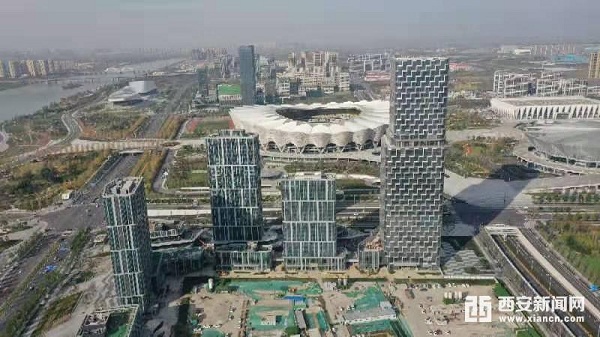 The project is being constructed by the Building and Installing Engineering Co of China Railway 12th Bureau Group on the south side of the Xi'an Olympic Sports Center, next to the Xi'an Ring Expressway in the south.

With a construction area of about 196,000 square meters, the project will consist of three 100-meter commercial tower buildings and one 160-meter super high-rise hotel.

The design of the building's facade was inspired by the armor of the Terracotta Warriors and Horses, fusing the traditional culture of Xi'an with modern architectural language.

After completion, it will become a new commercial landmark on the south side of the Xi'an Olympic Sports Center.