In order to carry out nucleic acid screening, Xi'an International Trade and Logistics (ITL) Park has established a professional team to carry out door-to-door sampling for residents.

The initiative has resolved on-the-ground problems and met the needs of people in the isolation areas, especially the needs of the elderly, children and patients that find it inconvenient to go out. 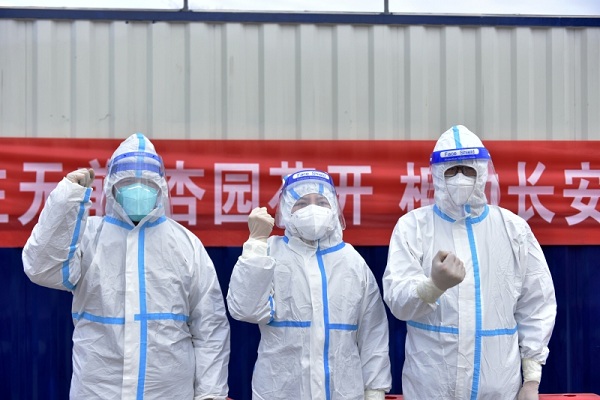 Medics promise to join in efforts to fight against the virus. [Photo/xa.gov.cn]

"This is the first time I have participated in COVID-19 pandemic prevention and control work. I have deeply experienced the responsibility of being a medical staff member," said Han Bo from the Xi’an Hospital of Traditional Chinese Medicine.

"Only when medics protect themselves, can they serve the residents better and safer and let them avoid danger," Han said.

There are currently more than 500 nucleic acid testing staff members in ITL Park. A complete joint prevention and control management mechanism has reportedly been formed there, to build a healthy line of defense against the virus.